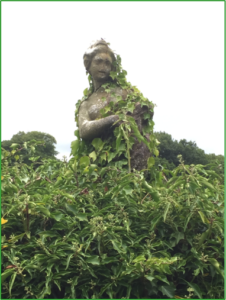 “It was a joy to share in this creative process with one another. It helped us listen to and connect with each other and with ourselves.”
Jen S.  – a participant in ‘Writing and Retirement’

Did you know that the word for retirement in Spanish is jubilación?  It was one of the things I learned whilst running a writing workshop at Gregynog Hall, the extraordinary former home of the Davies sisters, now owned by The University of Wales. I was invited to join a group of ministers of the Church in Wales on their pre-retirement retreat as a writer in residence and to run a workshop on Writing and Retirement. To be ‘jubilado’ sounds more joyful than to be retired – and it gave us a positive way to start talking and writing about retirement.

Retirement is often seen as a time for slowing down, letting go of responsibilities and stepping back from life. It can be a difficult time, facing changes that bring feelings of loss of identity and purpose.

For ministers of the church, retirement can pose particular problems. They may have to give up their home as well as their parish and make difficult financial decisions. Some may be unprepared, having given little thought to retirement during their busy lives, often running several parishes over a wide area and being on the front line, caring for others and supporting them during crises.

People facing retirement often have a long list of projects and goals they’re still waiting to realise. Far from simply being an ending, they have elaborate and ambitious plans and are itching to get on with them. This can sometimes lead to feeling overwhelmed and worried that ‘time is running out’.

All of this was in the mix during our workshop where I used creative and expressive writing exercises to encourage people to explore ways to flourish and continue to contribute during their retirement.

Lists are a great way to get into writing and I often use them in my workshops. To introduce ourselves and the theme of identity we began the workshop by considering all the names we had ever used for ourselves or been given by others. We read Wendy Cope’s poem ‘Names’ and then wrote our own list of names. These included professional or generic names, official titles, forms of address, nicknames, family names, pet names.

The lists that emerged were fascinating and often amusing and led us into a discussion about which names people wanted to retain after retirement and which to discard. Several of the participants were Welsh speakers and it was wonderful to have the added dimension of the beautiful Welsh language and to learn some new words. Cariad the Welsh word for love or darling, featured in several lists.

I find that lists bring a feeling of order when we feel overwhelmed and help us to tolerate chaos. When we start a new phase of life we do well to stop and consider how far we’ve travelled already. I invited the group to write a list summing up their life and ministry so far and to include significant events, experiences, objects, relationships. Several of the lists produced interesting juxtapositions and varied line lengths creating a poetic rhythm.

The writers enjoyed sharing their lists and were surprised and delighted by the rich variety of experience in the group.

Reviewing their lists to see what, if anything was missing helped them to clarify and set intentions for their retirement. They enjoyed having time to reflect on and appreciate their lives in a creative way.

I find Reinekke Lengelle’s imaginative career cards are an excellent tool for stimulating writing and thinking about your life journey and career path. They are flexible enough to be used at any moment of transition including retirement.

Here are extracts from two of the responses to a questioning exercise I led using cards – shown with the writers’ permission.

The card asked, ‘What do you covet or long for? What are you jealous of? Then imagine that you have those things.’


I don’t want stuff
I want to be re-educated
to understand the landscape where I walk
to call to mind the Latin name for that
to instantly imagine the lives that people lived
when that was built or this destroyed.

I want to know that tune
to play that piece
to talk about its composition
in a language I have never learned.
I want to read a hundred thousand authors
whose names I don’t yet know.

I want to speak a language when I go
to know their history, culture, challenges and joys.
I want to cook the perfect apple pie.
I want to know iPads, MP3s, smartphones and the rest.

But when I have it all
I find that most of all
I crave to know MYSELF
Child of God – OK
but who am I?


Another respondent wrote the following:

‘I want to be more ‘Old School’. I want to be able to turn off my SatNav and read a map or know by heart the ingredients for a Victoria sponge without Googling it. I want to fix my own car or boiler without having to call others out. I’d rather turn off the internet and walk up a mountain, throw my iPhone in the sea and camp on a beach. I hate my reliance on my phone. As a child, I used to climb trees and read stories, play with friends in imaginary made-up lands and swim in the sea – the simple life. I long for it. (though if I climbed a tree I’m not sure I’d be able to get down). My grandparents taught me some wonderful lessons and none of them are to do with the latest clean-eating diet or how to get more apps on my smart phone. They taught me the important things in life – the things that connect us all. That family comes first. That life keeps going. Not to take myself too seriously and always wear a smile.’


After the workshop, many of the participants said they felt inspired to continue writing and journaling in the next phase of their lives. Several people wanted to write about childhood memories, personal losses; one person was planning to combine writing and walking, another was planning to write songs. Retirement is a time of transition, of loss and letting go, but also a time for embracing change and new beginnings.

I was able to draw up a list of some common sense advice for retirement shared on the course.

Members of the group left the course, full of life and creativity, with new dreams to follow  – ready to embrace retirement with Jubilation!

I’d like to thank Rosie Dymond and the St Padarn’s team for inviting me to facilitate the workshop and to stay and enjoy the rest of the programme. It was a privilege to work with ministers of the Church in Wales. Spending time in the presence of these wise and lovely people, hearing their stories and plans for the future, was uplifting and inspiring. We shared quiet space, poems, stories, music and singing in the fabulous music room and wandered in the peaceful surroundings of the Gregynog estate.

St Padarn’s sent me this feedback.

We use cookies to ensure that we give you the best experience on our website. If you continue to use this site we will assume that you are happy with it.Ok